The idyllic and historically rich island of Gotland, with its main city Visby being on the world heritage list now faces the consequences mostly felt by Swedes in mainland Sweden, namely foreign migrants seeking asylum in Sweden committing sex assaults and other criminal behaviour.

This bizarre and chocking story comes from last week, when a 30-year old handicapped wheelchair-bound woman reported that she had been gang raped by up to six asylum seekers after sharing a taxi with one of the rapists involved, then under the guise of letting her use the toilet where they lived they surrounded and took turns in raping her.

While this is act of gang raping a handicapped woman in the very country you sought refuge in is enough to cause fury and disgust in all decent human beings, the aftermath of this barbaric act is just as infuriating and scary.

After reporting the rape, five of them were arrested and held in police custody waiting for the investigation to start. However, the attorney that was responsible for the case decided that these men were free to roam the streets just four days after being arrested – free to endanger more women in Gotland.

Locals tried to find out the identity of these rapists and because there recently have been a change in the law making it possible for the police to classify the perpetrators names; the police were quick to classify their identities.

Following their release from police custody they were identified by a Swedish man that decided to confront and verify that they indeed were the ones being detained for the rape. 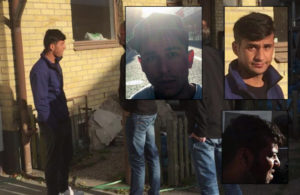 Identified participants of the gang rape of a wheelchair-bound woman.

This caused an uproar among the locals and received very much attention, the extreme-leftist organisation of “Expo” that works with identifying right-wing hate groups (read: anyone that does not feel that their country should be overrun by distant foreign peoples) made a statement that they were monitoring the situation (= identifying dissidents.)

This video below is what he filmed of the encounter:  (enable English subtitles)

As you can see in the video , the Swedish man confronts and verifies that this foreigner is indeed one of the five men that have been held in police custody after the gang rape. Before anything else can happen, two civilian-clothed policemen assigned for the rapists personal protection intervenes and the Swedish man decides to move off rather than risk being detained.

But this brave man instead waited and followed one of the rapists to downtown Visby where he again confronted the man, now standing with two of the other rapists involved in which he starts giving them his thoughts on their actions, and again, the protection detail was quick to intervene on their behalf and they were quickly escorted away from the city centre.

Public protests against this phenomenon of asylum seekers violence and sexual assaults were organized on short notice and hundreds of angry Gotland-residents showed up to show their support for the gang raped woman and their disgust about these asylum seekers being on Gotland in the first place.

The police later said that the rapists had been moved off the island but they were later spotted in another town in Gotland, probably in police protection hid away.

Threats were made by angry locals against the rapists and the responsible attorney which prompted the national police commissioner to classify it as a “special event” (mostly only used in case of riots, serious disasters or terrorists attacks) therefore giving it special resources and sending a larger police detachment from mainland Stockholm to reinforce the local police forces.

These special police units were seen patrolling Gotland, searching for groups of Swedes and identifying and searching their personal belongings.  When asked about their behaviour, the local police chief said frankly that they were not under his authority and that they did not know of any of their activities being carried out.

They even arrested the Swedish man in the video above and searched his house on loose charges and he was released the day after with no charge pending.

So let me break it down for you, how the justice system now instead of protecting the Swedish populace from these foreign criminals, represses their voiced anger and protects the disgusting criminals and even let them loose again – striking out against anyone protesting and trying to protect their families from these savages.

All in all, this is a surreal turn of events, when the state authorities move to supress the local populace and dissident voices in favour of foreign criminals that the state let in.

I think this is development we will see increasingly often as tensions flare in Sweden; this was just the first obvious incident documented.

PS: Of course, as to add insult to injury, the leftist so called “anti-racists” have started planning for a counterdemonstration against “Sexism and racism”.  Troubling times ahead.